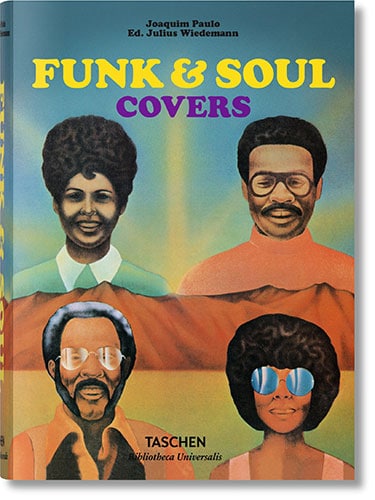 Following the success of Jazz Covers, this epic volume of groove assembles over 500 legendary covers from a golden era in African American music. Psychedelia meets Black Power, sexual liberation meets social conscience, and street portraiture meets fantastical cartoon in this dazzling anthology of visualized funk and soul. Gathering both classic and rare covers, the collection celebrates each artwork’s ability to capture not only a buyer’s interest, but an entire musical mood. Browse through and discover the brilliant, the bold, the outlandish and the sheer beautiful designs that fans rushed to get their hands on as the likes of Marvin Gaye, James Brown, Curtis Mayfield, Michael Jackson, and Prince changed the world with their unique and unforgettable sounds. Featuring interviews with key industry figures, Funk & Soul Covers also provides cultural context and design analysis for many of the chosen record covers. The author Joaquim Paulo is a consultant for major labels and directs a number of radio stations in Portugal. He started collecting vinyl at 15, and flies to London, Paris, New York and São Paulo to enrich his collection of over 25,000 LPs. He lives and works in Lisbon and dedicates his free time to recovering old and rare recordings. The editor Julius Wiedemann studied graphic design and marketing and was an art editor for newspapers and design magazines in Tokyo before joining TASCHEN in 2001. His titles include the Illustration Now! and Record Covers series, as well as the infographics collection and books about advertising and visual culture.
PREUZETI
ČITAJTE ONLINE