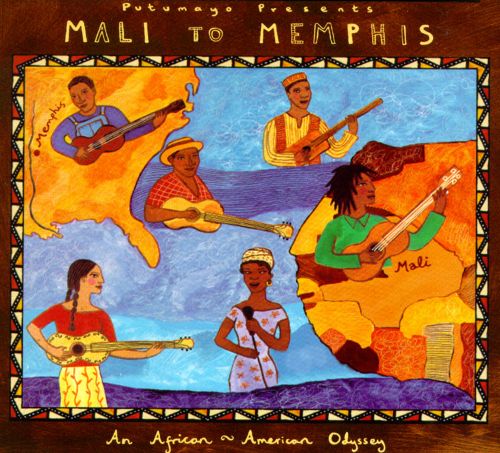 Mali to Memphis: An African-American Odyssey purports to show the cultural connection of West African music and American blues by example. In this, the compilation is fairly successful. On listening to the opening track, “Mon Amour, Mon Cherie,” by Amadou & Mariam, you immediately make a mental connection to the CD’s last track, Taj Mahal‘s “Queen Bee.” Both songs are of similar timbre and are constituted of a bright vocal melody accompanied by equally bright guitar harmony and occasional leads. The sounds do seem to represent “parallel musical universes,” as this African-American Odysseypurports. It becomes easy to see that there is a kinship, that these sounds must be born of a common ancestor. The Delta blues tracks from John Lee Hooker and Jessie Mae Hemphill seem to evidence the tribal rhythms of the Malian tracks, albeit at a more relaxed tempo. Two other African tracks, from Habib Koité (an excellent album of his traditionally based Afro-pop is available on the Putumayo label) and Rokia Traoré (honey-voiced, she won accolades in an international competition), bear the sounds of the ngoni, a native lute and predecessor of the banjo. This instrument’s strident sound, when plucked, does seem to prefigure the picking style on the guitar used by such an American example as Guy Davis(&”You Don’t Know My Mind,”). Muddy Waters and Eric Bibb are also included in this informative and entertaining comparative sampling. – Tom Schulte, Allmusic
PREUZETI
ČITAJTE ONLINE