Sing Along with Putumayo 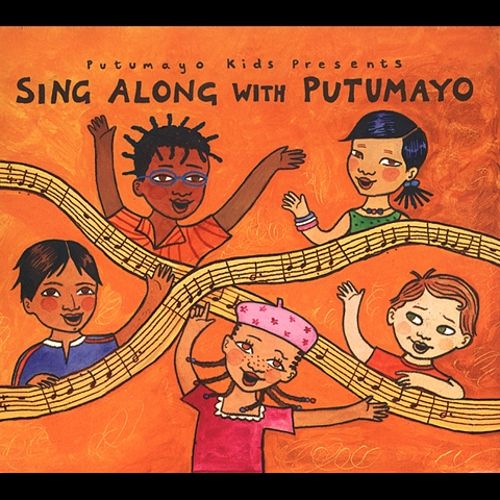 From Putumayo’s children’s division, Sing Along With Putumayo is a decent attempt to make an American roots music album engineered for kids. The bulk of the artists here aren’t really from the children’s music genre at all, but they sweeten their songs a bit for these recordings. The album opens up with a simple folky piece from Arlo Guthrie, then proper kids’ songs from bluegrassers Rhonda Vincent and Tim O’Brien. Rufus Thomas contributes an excellent Memphis soul version of “Old MacDonald,” and Keb’ Mo’ tosses in his own take on the O’Jays‘ “Love Train.” Taj Mahal does a bit of ragamuffin, and Rosie Flores does a bit of old-style boogie woogie, Dan Zanes joins a crew of little ones for a full-fledged piece of folk, and the Music for Aardvarks troupe uses folk music as a vehicle for another piece entirely from the kids’ genre. Bluesman Eric Bibb tosses in “Michael Row the Boat Ashore,” and one of the few honest-to-goodness children’s artists, a duo from the band Ida, contributes a soft rendition of “You Are My Sunshine.” Closing out the album, Guy Davis spins a song in an older style of blues-tinged gospel that works perfectly for the piece. The music isn’t what one would expect from a lot of the artists here, but it’s quite good. Putumayo has possibly done something difficult for children’s albums to manage: they have made a nice collection that the kids can sing along with (lyrics are available for the songs as well), and added some name recognition and nostalgia, along with higher quality songs, for the parents to stand on endless replays. – Adam Greenberg, Allmusic
PREUZETI
ČITAJTE ONLINE