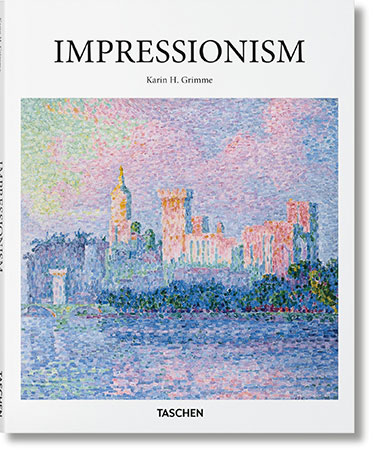 Discover how scenes of daily life and delicate dabs of color shocked the art world establishment. In this TASCHEN Basic Art introduction to Impressionism, we explore the artists, subjects, and techniques that first brought the easel out of the studio and shifted artistic attention from history, religion, or portraiture to the evanescent ebb and flow of modern life. As we tour the theaters, bars, and parks of Paris and beyond, we take in the movement’s radical innovations in style and subject, from the principle of plein air painting to the rapid, broken brushwork that allowed the Impressionists to emphasize spontaneity, movement, and the changing qualities of light. We take a close look at their unusual new perspectives and their fresh palette of pure, unblended colors, including many vividly bright shades that brought a whole new level of chromatic intensity to the canvas. Along the way, we recognize Impressionism’s established greats, such as Edgar Degas, Claude Monet, Berthe Morisot, and Camille Pissarro, as well as many associated artists worthy of closer attention, including Marie Bracquemond, Medardo Rosso, and Fritz von Uhde. The author Berlin-based Karin H. Grimme works as a historian, art historian, and author for museums, exhibitions, and media, focusing on the history of the 19th and 20th centuries and in particular on the history of the Jews in Europe. She is the author of numerous journalistic and academic publications in the press, in broadcasting, and in the multimedia sphere; as author and editor she has produced works on, among other things, the Jewish bourgeoisie in the 19th century.
PREUZETI
ČITAJTE ONLINE