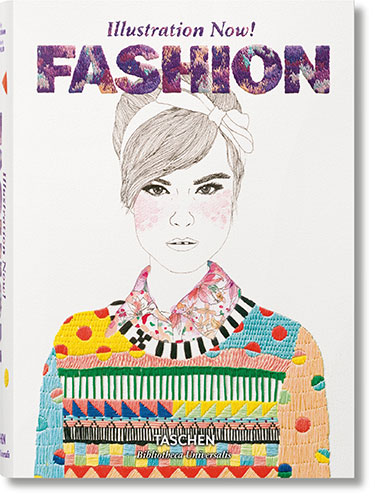 Every dress begins with a drawing, every skirt with a sketch. Illustration is integral to fashion design not only as a means of expression, and the starting point of every design, but also for patterns and prints as well as magazine editorial illustrations. Often, artists will even illustrate the newest looks directly from the catwalks. It’s high time we celebrated fashion illustration in our Illustration Now! series: here you’ll find new work from 90 artists around the globe, including Ruben Toledo, Aurore de La Morinerie, Bil Donovan, Tanya Ling, and Jean-Philippe Delhomme. The book features quotes by experts from the fashion world: Valentino compliments the work of Gladys Perint Palmer; voices out of the studios of Maison Martin Margiela, Christian Dior, Louis Vuitton, and H&M add their praise for the talents in the book. Following an introduction by illustration expert Steven Heller, the historical essay by art and fashion historian Adelheid Rasche provides an in-depth exploration of the subject. Looking back to the 17th century, she draws a timeline of fashion illustration until today, accompanied by images such as an early etching by François Watteau, a drawing by Paul Iribe for the book of the famous Parisian couturier Paul Poiret, and illustrations by the highly acclaimed masters of modern fashion illustration René Gruau and Antonio Lopez, as well as, from more recent years, François Berthoud. The editor Julius Wiedemann studied graphic design and marketing and was an art editor for newspapers and design magazines in Tokyo before joining TASCHEN in 2001. His titles include the Illustration Now! and Record Covers series, as well as the infographics collection and books about advertising and visual culture.
PREUZETI
ČITAJTE ONLINE